Indian Government has taken up seven projects in 2021-22 for exploration of lithium reserves in various states of the country through The Geological Survey of India, the government told the Parliament on Wednesday, 28 July 2021.

As the report published in Swarajya, Lithium, a strategically important metal, is a key element for new technologies and finds its use in battery, ceramics, glass, telecommunication and aerospace industries. The well-known uses of Lithium are in Lithium ion batteries, lubricating grease, high energy additive to rocket propellants, optical modulators for mobile phones and as convertor to tritium used as a raw material for thermonuclear reactions i.e. fusion.

"During the present FSP 2021-22, GSI has taken up 7 projects on Lithium in Arunachal Pradesh, Andhra Pradesh, Chhattisgarh, Jharkhand, Jammu & Kashmir and Rajasthan," he said.

The minister, however, the added that resource of lithium has not yet been augmented by GSI, a Ministry of Mines release said.

Further, Atomic Minerals Directorate for Exploration and Research (AMDER) has undertaken exploration for lithium in potential geological domains in parts of Karnataka and Rajasthan, the minister informed.

Reconnaissance surveys have been also carried out along Saraswati River palaeochannel, in Jodhpur and Barmer districts, Rajasthan for locating lithium mineralisation associated with brine (saline water in salt lakes).

"Preliminary surveys on surface and limited subsurface exploration by AMD, have shown presence of Lithium resources of 1,600 tonnes (inferred category) in the pegmatites of Marlagalla – Allapatna area, Mandya district, Karnataka," the minister said.

KABIL has signed Non-Binding Memorandum of Understanding (MoU) with non-disclosure agreement with three state-owned organizations of Argentina for the purpose of information sharing with respect to prospective mineral acreages.

For its lithium battery needs, India was relying on imports from China, Hong Kong, and Vietnam over the years.

Further, Australia, the world’s largest producer of lithium and in possession of the world’s second-largest minable lithium reserves, is looking at expanding its trade in lithium resources with India.

But with the global demand for lithium rising year after year – thanks largely to its role in the increasingly valued lithium-ion battery – the need for India to dig its own earth to find lithium deposits is assuming greater importance.

Because of lithium’s thermonuclear application, the government has always been invested in unearthing lithium deposits. Atomic Minerals Directorate for Exploration and Research (AMD), under the Department of Atomic Energy, has been the agency driving this work. But exploration efforts have intensified of late in the light of lithium’s rising demand.

Within this context came the exciting revelation by the government recently that lithium deposits worth 1,600 tonnes were found to be present in Mandya district, Karnataka.

AMD, though, was quick to clarify that this number was only a preliminary estimate and that not much could be read into its possible economic benefit at this point.

“Further, unless a proper technology/method is available to profitably extract lithium from its ore, the real benefit of exploration may not be there,” said a Department of Atomic Energy release.

-As Reported in Swarajya-

India will soon have First Ever Lithium Refinery

First - Make better Battery Second- You can improve the quality of your batteries.... 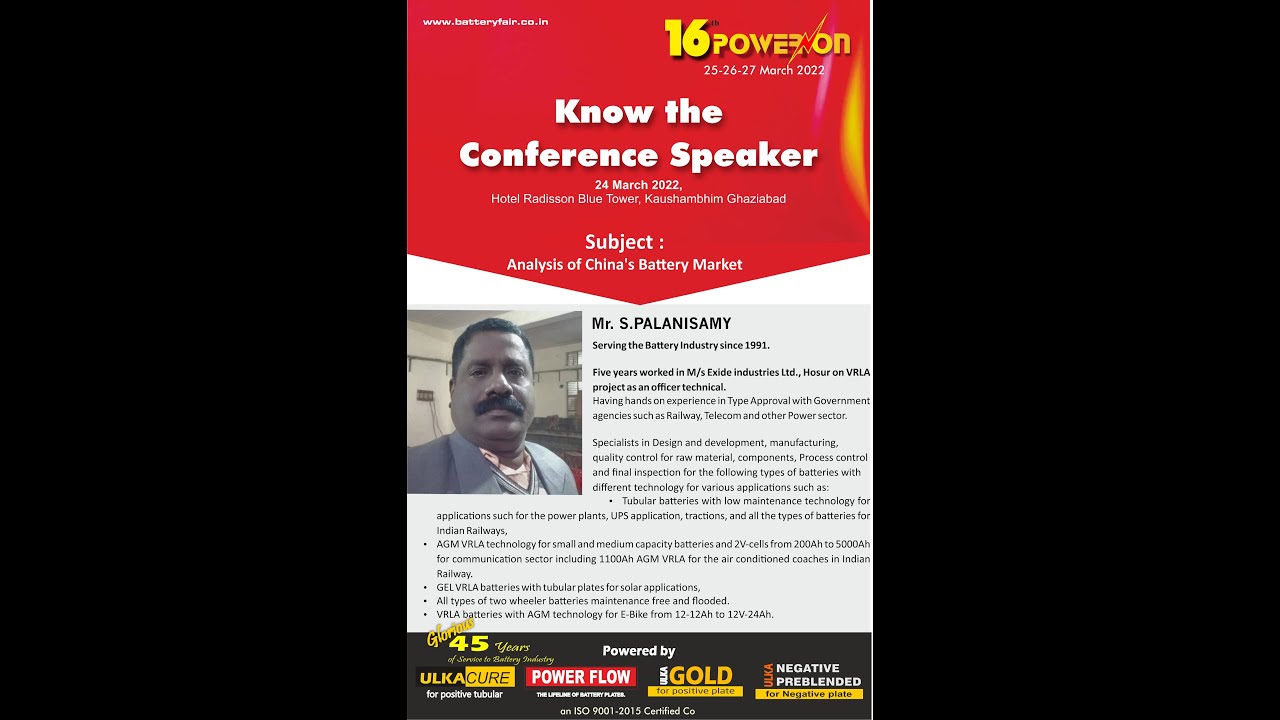 Presentation of SS Palanisamy-AGM and VRLA Battery Specialists at 16th Power On...

Liquid Metal Battery (LMB) is combination of 2 metals- Magnesium and Antimony. The...